We were recently called to Loudonville, NY, to deal with a homeowner’s gray squirrel problem. These are crafty creatures.

Scientists believe we may underestimate the ability of the eastern gray squirrel to problem-solve given its small rodent brain. Recall that these backyard creatures are capable of remembering, with a high degree of accuracy, where they buried countless nuts. They wouldn’t survive otherwise. Smart? Maybe. Cute? Some would regard the gray squirrel as an adorable and amusing critter. But as many homeowners in Loudonville could tell you, gray squirrels can sometimes be more destructive than rats. They are a very stubborn, tenacious species, and when they find their way into your home or attic, it is challenging to keep them out.

Gray squirrels are problem solvers that can think their way into places they are not welcome. If they sense they are being followed, squirrels may trick their observers into thinking they are burying their food or going another direction. They manipulate acorns in a somewhat convoluted way, often removing the nut’s reproductive portion before burial, so the acorns don’t sprout. Squirrels also have an acute understanding of how long their food will be safe to eat, eating perishable seeds immediately, and “squirreling” away fresher ones in the ground or trees.

These methodical behaviors have allowed gray squirrels (sciurus carolinensis), natives of the eastern United States in areas like Loudonville, to invade and thrive in Great Britain, Italy, and other parts of the world. In the UK, the eastern gray squirrel has displaced the native red squirrel (sciurus vulgaris), where the two cohabitated, displacing the red squirrel to near extinction. 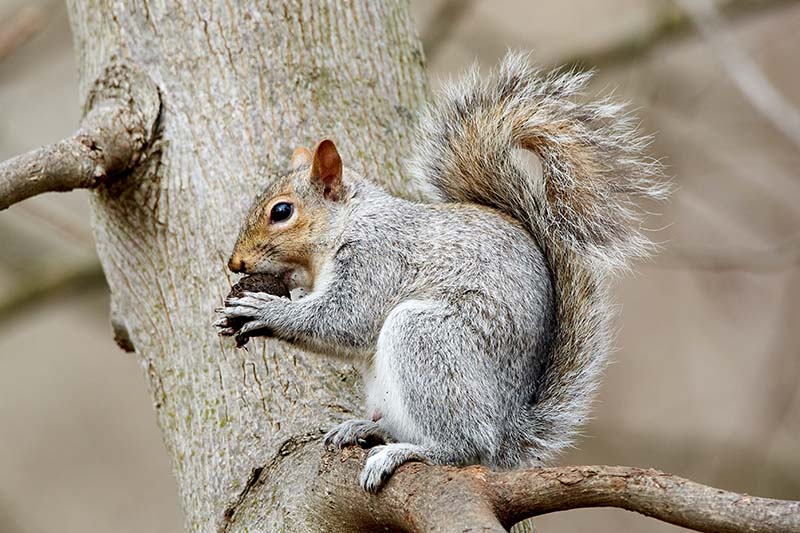 How to Identify a Gray Squirrel in Loudonville and Elsewhere

The gray squirrel has a gray coat, with hints of auburn on their face, back, and feet. They have a characteristically bushy tail. The name, “sciurus” (sciurus carolinensis), is derived from two Greek words, skia, meaning shadow, and oura, meaning tail. This name alludes to the squirrel sitting in the shadow of its tail. And “Carolinensis” meaning Carolinas, where the mammal was first recorded. Gray squirrels can be easily distinguished from red squirrels by their larger size, gray fur, and smaller ears without tufts.

Here are some gray squirrel basics:

Gray squirrels like to build their nests in safe, mild places such as hollow trees. When trees and temperatures are not conducive to their needs, they take up residence in attics and chimneys. Indeed, one of the most common problems associated with gray squirrels in Loudonville is their ability to invade human homes. They associate holes in eaves, soffits, and beams with a tree cavity, their natural nests, and move right in. If gray squirrels find their way into these places, they will chew through electric cables and utility pipes, causing various problems within the home. Indeed, electrical wires that have been chewed often can start house fires.

Gray squirrels are rude housemates. Scurrying across your ceilings, gnawing, and pitter-patter sounds are a sure clue that you have a squirrel problem. Like rats, squirrels incisor teeth continually grow. They love new places to gnaw to keep them down. They can chew through beams and structural wood, causing thousands of dollars of damage.

Keeping gray squirrels from your yard is virtually impossible, but it is possible to keep them out of our home. To prevent squirrels from entering your house, you need to secure any holes that may be exposed. If access points are correctly blocked, you can reduce or eliminate the damage these “bushy-tailed tree rats” can cause.

Prevention is paramount to keeping gray squirrels, or any other pest, from getting too comfortable in your home or office. Yard maintenance and cutting low hanging limbs and branches away from your structure can reduce the likelihood that squirrels get in through the attic vents and facia boards. Secure and maintain all parts of the exterior of your structure and repair any rotted or damaged areas of eaves and soffits. Also, make sure your roof and vents are free from damage.

The best remedy for an infestation of gray squirrels is to trap them live at their access point, when possible. Install a live box trap at the opening and bait it with peanut butter, nuts, apple slices, or seeds. Always consider safety first and assure that you have the proper equipment for accessing your roof. If you can’t access your roof safely, you can place the traps in high traffic areas they are using to gain access. You must give the traps enough time to catch all squirrels that are IN your home before closing up access points – they are very animated and will cause extensive damage if locked inside.

Squirrels can also cause damage to trees on your property, especially to seedlings. You can protect specific trees in your yard by fitting professional metal sleeves. However, this is only effective on mature trees that don’t grow too fast, as the sleeves need to be secure enough such that the squirrels can’t get between the metal and the tree. This method keeps the squirrels from being able to climb the metal’s slippery surface.

When to Call a Gray Squirrel Removal Professional

Instead of scaling your rooftop, it’s likely a better idea to call a professional pest management company trained to look for all possible access points and additional pest problems. The experts at Hudson Valley Wildlife Solutions are here to help!