Raccoons can be a very intimidating animal to have in or around your home. They can be aggressive, often posing a safety risk to your pets and family. They leave toxic droppings the size of small dogs that are very unpleasant. Over time, they can do extensive damage to your home and to your property. Yet, because they are the #1 rabies vector species in New York, trapping or manipulating them can not only be dangerous, but also illegal. Raccoons are definitely one animal we suggest seeking professional help with, professional help we are prepared for and happy to provide.

A Raccoon Trapping and Removal in Loudonville, NY 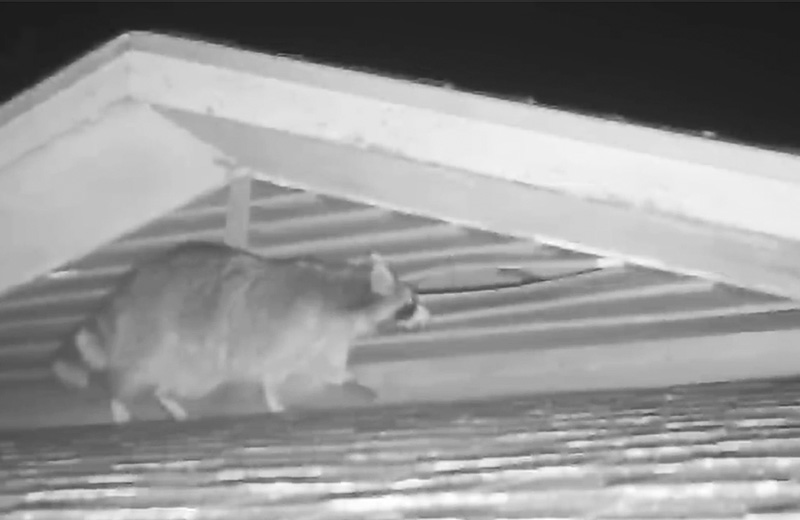 Removing Raccoons from an Attic in Albany, NY

Tendencies/Symptoms of Raccoons In Your Home

Initially, a raccoon problem may appear as harmless as a trash can knocked over, or a fast food wrapper dragged into your yard from who knows where. Some homeowners have experienced mangled yards after a night of raccoons rummaging around for worms or “grubbing” your lawn. Raccoons will often wander in search of food, foraging in trash cans, sewer drains, dumpsters, and crawlspaces. Sometimes this wandering will lead them to new areas to claim for shelter. Culverts, chimneys, attics, basements, and sheds can all serve to keep raccoons out of harsh winds and rain, as well as protected from predators including other male raccoons which regularly cannibalize their own for food. In some cases raccoons have been known to sneak into squirrel nests in the middle of the night, ambush and eat the squirrels, then take whatever cavity the squirrels inhabit as their own. In this fashion, a small hole you may have noticed before and maybe suspected squirrels were living in may end up escalating into a much larger issue if not remediated immediately.

Once they have decided to make their way into your house, generally raccoons are not very covert in their operation. They tend to rip massive entry holes through siding, soffits, vents or even right through shingled roofing. Their footsteps are VERY loud, in fact our clients often describe the sounds in their attics as being comparable to what they would expect a burglar breaking in to sound like. An adult male raccoon can be as strong as a 100 pound man, and often just as loud. Other clues you may hear may range from rambunctious wrestling and playing, or whining of the cubs, growling or fighting amongst adults, or chewing and ripping of construction materials to make their living space more comfortable. The final clue that you are dealing with a raccoon problem is the odor. Sometimes described as a “rotten caramel” type smell, raccoon droppings tend to accumulate and become very pungent. The distinctly “canine” odor emits and penetrates carpets, sheetrock, insulation, and even housewares. This odor can linger even long after droppings have been removed, so without solving your problem it will only get worse.

Trapping: By far the most common solution most clients are interested in is trapping. While a permanent solution may require preventative controls, often times a quick trapping session yields fast results and relieves pressures associated with raccoon issues. If raccoons have not made their way into your home, systematically removing the threat from your property before they become a more intrusive problem is the logical and effective first step for prevention.  Trapping can be accomplished through various methods ranging from passive baited live cages, forced capture live cages attached to den areas and pinch points, or if applicable lethal traps can be utilized.  Trapping session length is often dictated by local population numbers as well as local pressures such as food and resource availability.

Patchwork and Prevention:  prevention methods for raccoons can start with something as simple as replacing your outdoor trash bins or sprinkling some cayenne pepper along the ground to discourage roamers.  If this is not enough, or if they begin to infiltrate your home, their persistence   is often in search of shelter. We have encountered a wide range of raccoon problems and are prepared to address your specific issue with a unique and durable preventative solution

Often times in nature raccoons have been known to shimmy down the inside of a rotted tree trunk to make their den. Functionally speaking in terms of raccoon habitat, your chimney provides the same type structure. Raccoons have been known to inhabit chimneys fairly regularly. We employ a few methods of extracting raccoons from chimneys depending on how many, and what age/sex your particular occupants are ranging from manual removal, forced capture, and scent eviction. Once free of raccoons a simple chimney cap can be affixed to the top of your flue to close this option off permanently

In some cases raccoons will move under decks, porches, and crawlspaces similar to skunks or opossums. In cases like these, once the animals are removed we can install heavy gauge wire mesh or a fence type barrier to prevent reentry. In most cases it is advisable to dig a trench and bury the screening so the raccoons can’t dig under it.  Other times raccoons may climb up your roof or under your soffits to rip a hole into your attic. Attic vents, ridge vents, or even weak spots in a roof valley are all susceptible to entry.  Again, following the successful removal of the animals from the premises, we not only repair or replace damaged sections of your structure, but we do so in a fashion as to prevent the problem from ever recurring.  Attic vents are clad in a tough galvanized screen to permit ventilation but prevent entry, Shingles can be patched in with metal underlayment, or whatever it may take to make your home look as good as new and be worry free for years to come.

We service from Saratoga, Albany to Rhinebeck, and Woodstock of New York

Our range of service include the Hudson Valley region, from Saratoga to Rhinebeck area. We are always on call for emergency situations and will provide the best service since we heavily rely on referrals as our main source of advertising.